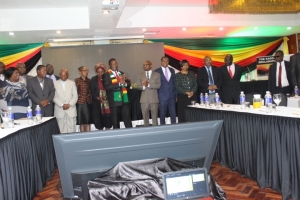 (SALUTATIONS)
Your Excellency, the Zimbabwe Labour Movement is pleased to be part of this historic moment in the history of the working people of Zimbabwe. It is historic in that for over two decades we have been waiting for this occasion. It also could not have come at a more appropriate time given the various crises afflicting our economy and hopefully it will provide an impetus to our quest to find a lasting solution to problems facing our great nation.

History has taught us that people can go to war, they can strike , they can go into the streets in protest, but at the end you will have to sit down and talk. You cannot do away with social dialogue. The launch of the Tripartite Negotiation Forum Act is therefore a step in the right direction.

We comprehensively studied the TNF Bill but have not had an opportunity to deeply study the final Act. Yes we may have reservations with some clauses, but we still regard this occasion as a positive step. We have been clamoring for this law for a long time. If there are areas that we feel are not good for us, we will point them out in due course and have them collectively looked into.

The importance of social dialogue especially in crisis periods is self evident. Notable examples such as the case of South Africa during the transition from apartheid and more recently Tunisia during the democratic transition after the Arab Spring of 2011 when they established the National Council for Social Dialogue as an institutional framework for national consultations, and went on to agree on interventions for socio-economic recovery. The ILO has in effect been promoting the social dialogue approach to crisis responses, particularly in fragmented societies to achieve reconciliation, confidence and nation-building, inclusive recovery and sustainable development. Interestingly, it has been noted that countries where social dialogue proved most resilient, with experiences of social partnership and well established social dialogue institutions reacted more rapidly and efficiently and were better equipped to weather the economic and political storms.

This is because Social dialogue represents a “space of governance” which can accommodate a broad range of actors and ensure broader ownership of development policies and programmes, thereby enhancing political legitimacy. In addition, it is a proven source of stability at all levels, from the enterprise to society at large, promoting productivity and shared growth under conditions of fairness and social justice.

Your Excellency, of particular interest are the key lessons from the evolution of the development discourse, where three core principles have been highlighted as critical to the Development Effectiveness Agenda as enshrined in the Busan Partnership for Effective Development Co-operation of 2011, namely, democratic ownership, inclusiveness and accountability. The important point to note is that programmes cannot succeed without broad-based stakeholder participation and ownership. If we are to relate this to our own experiences, to what extent are our development programmes such as ZimAsset, the Transitional Stabilization Programme (TSP) and the recent Monetary Policy Frameworks products of broad stakeholder participation, and to what extend are they broadly owned?

Does the narrative of “austerity for prosperity” speak to our lived realities and aspirations? To the best of our knowledge, austerity implies cutting back, which adversely impacts consumption, investment, aggregate demand and growth. In short, austerity is procyclical as it worsens the economic downturn. It is for these reasons that during the financial and economic crisis of 2008, developed and emerging nations did not pursue austerity, but rather implemented fiscal stimuli packages. We may collectively ask whether we are learning from these experiences, as well as our earlier austerity programmes such as ESAP that accelerated de-industrialization and the informalization of the economy. Our own experiences are that we tend to discuss policies after they have been enunciated.

Your Excellency, it is equally important to note that we are in a serious economic crisis , with the re-emergence of the parallel market for foreign currency amidst constrained supply feeding into rising prices and inflation, which stood at 75% in April 2019. We may be reminded that in September 2018 inflation stood at 5.4%, jumping to 21% in October following the Monetary and Fiscal Measures adopted on 1 October 2018 which included separation of Nostro FCA and RTGS FCA and the 2% transactional tax. In fact, until 2016, the economy was in deflation with negative inflation levels.

With the average minimum wage of $300, against a Food Poverty Line of $295 and a Total Consumption Poverty Line of $873 in March 2019, it is clear that wages are way below the living wage threshold. Your Excellency, most working class families are food insecure, they can’t afford medical care and drugs, they are failing to pay rentals and school fees. In short the workers and the majority poor citizens are in a dire situation, poverty has worsened. It is therefore hoped that this institutionalisation and formalisation of social dialogue will lead to negotiations of a new social contract that is fair and just to all stakeholders.
We must hasten to caution that the promulgation of the law is never the panacea to our socio-economic crisis . We need much more than the Act, it is about change of culture , political will and enduring democratic principles and practices. The State must be open, accountable and responsive to citizens.

The Declaration of Intent Towards a Social Contract that was signed by the social partners on 19 January 2001 provides guiding values and principles for negotiating a Social Contract, including: Cultivating a culture of tolerance and restraint; sharing a common vision regarding the future development of the country; negotiating in good faith; ensuring that social partners are accountable to each other; subordinating sectoral interests to national interests; promoting a mutually beneficial environment (a win-win situation); adopting a flexible approach to negotiations that allows for adjustment to cater for new and unforeseen developments; and ensuring strict confidentiality of the issues under negotiation.

Notably, the parties agreed to deal with the underlying causal factors in a more holistic manner, resulting in the crafting of the Kadoma Declaration: Towards a Shared National Economic and Social Vision. The Declaration defined country risk factors and their causes, their impact on the economy and society at large, solutions and implementation modalities, outlining the role of each of the three social partners.

Among other factors that still apply even today, the Kadoma Declaration identified the following as the causes of the high country risk factors, (i) failure by institutions of governance to function effectively; (ii) mismatch between policy and action; (iii) delay in policy implementation; (iv) the overall spread of wealth in the country and (v) lack of political tolerance and lack of respect for human rights.

Your Excellency, speaking on behalf of labour, it would be amiss if I fail to mention the Report of the ILO Commission of Inquiry of December 2009 which was set up by the Governing Body of the ILO in November 2008 to examine serious allegations of violations of basic human and trade union rights. The Commission, which visited the country on its fact-finding mission in August 2009 established the following:
Routine infringements of workers’ right to strike and demonstrate;
Widespread arrests, detentions, assaults and torture of union officials and members;
Intimidation and harassment of unions and their members, including teachers and farm workers;
Patterns of interference in union affairs and anti-union discrimination;
Obstructions to collective bargaining and social dialogue processes; and
Failure in institutional protection of union rights.
Importantly, the Report highlighted the role of the police and army in the violations, an issue that is pertinent even now.

We therefore do note as labour that national social dialogue is of extreme importance and has a strategic dimension in that deepening consultation between social partners builds consensus on broad issues, including currency options that should enable Zimbabwe to navigate this treacherous terrain and crises in a balanced and inclusive way that promotes social justice, fairness and equity. This is in line with Section 13(2) of our Constitution, regional, continental and international statutes the country has ratified. Section 13(2) of the Constitution specifically mandates Government to “…involve the people in the formulation and implementation of development plans and programmes that affect them.”

Continued violation of rights enshrined in the Constitution, bickering, name-calling, animosity and polarization will only serve to sink this country deeper into crisis and the abyss, further impoverishing the working people we represent. We therefore stand here as labour to re-affirm our commitment to the founding principles and values of social dialogue espoused in our frameworks negotiated in the TNF, and especially the Declaration of Intent and the Kadoma Declaration.

Let me point out that the government has nothing to fear from the ZCTU. Your Excellency, we are a patriotic trade union with passion for workers’ rights and love for our country. We are a genuine labour movement whose sole aim is to make Zimbabwe a better place not only for workers, but for every Zimbabwean.

We congratulate you, Your Excellency and the people of Zimbabwe for this historic achievement and pray that wisdom , tolerance and respect will reign our egos and self interested sectoral considerations for the good of the nation.

Once again, thank you for inviting us.

God Bless You All