The ZCTU condemns the arrest and harassment of Journalists and politicans 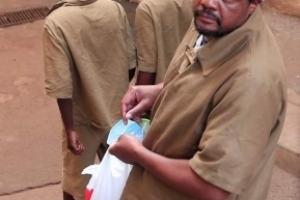 RE: The ZCTU condemns the arrest and harassment of Journalists and politicans

The Zimbabwe Congress of Trade Union(ZCTU) condemns in strongest terms moves by President Emmerson Mnangagwa’s government on Monday to arrest an opposition leader and journalist in a crackdown ahead of planned anti-government protests on July 31.

Jacob Ngarivhume, the leader of Transform Zimbabwe was taken to Harare Central Police Station while journalist
Hopewell Chin’ono, one of the journalists who have been exposing widespread corruption in government was also forcibly taken from home after security agents broke a glass door to gain entry.

The government has in recent days launched raids at the homes of activists, politicians, and trade unionists and harassed their families.

ZCTU President Peter Mutasa has his car tyres punctured and had his family harassed just a few days ago.

Ngarivhume is heading an internet campaign for nationwide protests against corruption on July 31.

The ZCTU is worried by these unending spate of events and demand that they end forthwith.

We believe that the State is now resorting to arresting, intimidation and harassment of people to silence them after reports of massive looting and corruption in high offices are emerging.

Peaceful gathering, demonstrations and petitions are provided for in our constitution and government is advised to uphold these constitutional rights.

Resorting to heavy handedness when citizens are raising genuine concerns has never been a solution. Actually those being arrested and harrassed are merely representatives of the many that are not able to speak for themselves. Instead of dealing with the message the state is shooting the messenger.

The ZCTU reiterates that the Zimbabwean authorities have a penchant to shoot themselves in the foot and the country will remain a pariah state as long as authorities do not change their ways.