ZCTU MAY DAY MESSAGE TO THE WORKERS OF ZIMBABWE: 1 MAY 2021 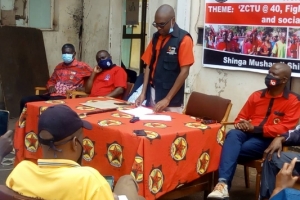 ZCTU PRESIDENT PETER MUTASA MAY DAY MESSAGE TO THE WORKERS OF ZIMBABWE, 1 MAY 2021

Fellow workers and citizens at large, I address you today on this significant occasion (Workers Day) when workers worldwide celebrate the value of labour.

It is unfortunate that we are unable to gather in our numbers owing to Covid-19 restrictions. We are however appreciative that in the small gatherings allowed, we have decentralized our commemorations to districts and are able to cascade our message of unity and hope. Faced with a bleak political and socio-economic environment, workers need unity and hope to strengthen their resistance in facing the current obstacles.

This year’s workers day commemorations are particularly special to the ZCTU in that your organization is celebrating its 40th anniversary and we would be holding its 9th elective congress. As espoused by our theme ‘ZCTU @40 Fighting For Political, Economic And Social Justice In Zimbabwe’ our work is cut out. The theme aptly sums up workers challenges and points to the undelivered areas and shortcomings of the past 40 years.

The theme therefore calls us to reflect and look back at how we fought against a brutal regime of Robert Mugabe. Despite the brutality and ruthlessness of the state, the workers under the ZCTU led the struggle for civic and political rights as well as demand for socio-economic rights. We never gave in to the dictator.

As we are under a more entrenched and even more ruthless  dictatorship,  the theme calls us to learn from our past and draw our inspiration from those who fought for the gains that we are losing daily. On this we need to go back as far as the prior independence era.

We must draw lessons from Benjamin Burombo,  Masotcha Ndlovu,  Joshua Nkomo and others. If we lack their selflessness or courage we must at least learn from their class consciousness. They were under a ruthless colonial regime,  but as trade unionists they resisted every racial, exploitative and dictatorial policy of the state. They also understood that unless workers and the majority of citizens attain civic and political freedom, workers will never be prosperous. That clarity of thought and political consciousness must never elude us.

We must learn from Morgan Tsvangirai, Gibson Sibanda, Getrude Mthombeni and others. How they endured the brutality and fought for freedom, equality and justice. During their time,  they resisted the one party state agenda,  demanded and eventually got a progressive Constitution. It was through their fight that workers got a progressive Labour Act that promoted and guaranteed a lot of workers rights. Sadly this Act is now being mutilated. Their resilience,consciousness and courage must educate and inspire us.

Comrades and friends, we took a wrong turn in November 2017 when we supported the coup hoping that there will be progress. We jumped from the frying pan right into the fire and we have no one else to rescue us than ourselves.

Today we are under a de facto military rule. All our constitutional rights and freedoms are suspended. We no longer enjoy the fundamental rights such as freedom of assembly, freedom of speech,  freedom of association,  right to be free from torture and degrading treatment,  right to liberty and security of persons and many other such rights.

All our socio economic rights are violated daily. We no longer lead dignified lives as we are deprived of our socio-economic rights. The right to education, access to health,  adequate housing, fair wages and many others have all been violated.

We are also living and working under a failed state. If it is not failed to others,  for workers and the majority poor citizens,  Zimbabwe is a failed state.

Trade union leaders, political and civic society activists are abducted and tortured by state agents. The law is being weaponised and used to persecute dissenting voices. The judiciary is no longer trusted by many and has been  acting in many instances  in a manner that cement the view that it is captured and used as a willing weapon against citizens. Many of us have been arrested but we remember Sheila Chisirimunhu who was sentenced to sixteen months for demanding a salary increase. We know there are now many political prisoners in jail.

Our hospitals have become death traps. There are no medicines and the medical workers are demotivated. Our schools lack basic infrastructure like toilets and classrooms. Students have no books and teachers have no accommodation. The cost of education is beyond the majority.

Our roads are also in a pathetic condition. Potholes are littered all over exposing motorists to accidents and damages to vehicles.

Our transport system is pathetic. The public utility ZUPCO is failing to cope while exposing workers and travellers to Covid-19.  People are forced to stand in queues for hours to board the few available ZUPCO buses.

Over 83% of urban dwellers are not able to buy basic foods like bread, cooking oil and mealie meal. Over 70% are in poverty and  40%  in extreme poverty. The majority in poverty are workers whose salaries have been eroded due to fascist government policies. The set minimum wage is still at ZWL$2 500.00 against a Poverty Datum Line of ZWL28 362. All goods and services except wages, salaries and pensions are now pegged in US$. It is no longer a secret that wages, salaries and pensions payouts are barely enough. Our teachers, doctors, nurses and other workers are incapacitated but the situation is even more dire for farm workers and domestic workers whose earnings cannot buy a loaf of bread  a day for the whole month. The situation  has been compounded by the Covid-19 pandemic. A lot now needs to be done to alleviate the plight of workers, most of whom have been pauperized by commissions and omissions of the government.

The causes of our precarious and failed state status are well known. These are neoliberalism that has pauperised workers, endemic corruption, poor governance, state capture by cartels and monopolies, dictatorship, one party state agenda, kleptocracy,  conflation of ruling party and state,  patronage,  illicit financial outflows,  neo imperialism that is plundering our natural resources, lack of constitutionalism and rule of law.

As you can see, these are man-made and deliberately formulated to benefit a few at the expense of the majority working class. It is therefore clear that these can not be resolved through adherence to the rules and systems put in place by the ruling elites and their cronies.

Workers can not get reprieve from a judiciary that shares the same ideology of the ruling class as witnessed from the various judgements more particularly the infamous Don Nyamande v Zuva Petroleum commonly referred to as ZUVA judgement.

We can not rely on the Parliament which has lost credibility after the politically motivated recalls of elected Members of Parliament and the evident whipping system.

Workers can not rely on the Tripartite Negotiating Forum which is dysfunctional due to lack of political will by a government that is keen to benefit businesses at the expense of the workers. The government is prepared to use the police and military force to enforce its open for business ideology. In any case the government officials and their cronies in cartels and monopolies are the business owners  and act for their benefits.

You might have heard that labour walked out of the recent TNF after government connived with employers and refused to set a minimum wage. All goods and services except wages and salaries are now pegged in US$. Why should workers always carry the burden of everyone?

Government and employers have failed to provide the adequate safety nets for citizens and workers during these difficult times. Nothing tangible has been done. Instead we have witnessed a decimation of workplaces particularly in the informal economy, retrenchments, wage cuts and various labour violations that have led to the incapacitation of workers.

Covid-19 has exposed our government’s ineptitude in providing social protection to the vulnerable. The COVIDGATE scandal that has led to persecution of journalists has also exposed that our problems are mainly a result of corruption and impunity. Pensioners and the disadvantaged are at the receiving end of the economic crisis.

We need therefore to change the rules of the game. Like our predecessors, it’s time workers assert their power.

The only solution is a United Front led by workers that must wage a struggle against both repression and neoliberalism leading to restoration of the constitutional democracy. It must be clear to all that without democracy and constitutional freedoms,  there is no prosperity and dignity for workers and citizens.

The United Front must resist and fight against the neoliberal policies and ideologies of the ruling class and other cronies. The Thatcherism that is dominating our labour market is bad for all and must be resisted. The working class including formally and informally employed workers,  self employed workers and peasants whose toil is funding luxurious lifestyles of the ruling elites and their cronies must unite and peacefully resist.

We can not win on our own or in our sectors. The courageous and militant battles of the doctors,  nurses and teachers must be recognised. However we must draw crucial lessons that against a military dictatorship no sector, community or socio-political group will win on its own.

We therefore need the students,  communities,  civic society activists, churches, political players,  peasants and even to convince some being used against us  without gain by the oppressors to join the workers in a struggle for freedom,  justice, restoration of our  dignity,  equality and fairness.

This is why in our Political Policy Conference we resolved that we need a second National Working People’s Convention. We must urgently convene to clarify the agenda and the ideology that must drive our struggle. We push for the working class ideology, but will be willing to listen and engage all. The convention must agree on the strategies and everything about the collective struggle must be discussed frankly , openly and agreed.

It is only the collective power of a united active citizenry used peacefully , consistently and persistently that will stand against the military power of governments. We must clearly express that our call is for a non violent civil resistance by the people. We must never entertain any suggestion of violence. This will be counter progress and will only benefit the brutal state that enjoys monopoly on violence.

Workers of Zimbabwe, we need to address the underlying causes of slave wages as a united front and with urgency. No one is spared and none but ourselves will liberate us.

We will continue to raise our demands to employers and government.  We demand the following:

Comrades, victory on these demands   is possible if we are united and resolute. It was done by the Haymarket cadres who achieved the 8 hour working day through their blood which is the foundation for this May Day commemorations.

Let me conclude by paying tribute to those on the front lines during this pandemic. We are not sure of when the pandemic ends and it is vital that they be provided with a safe vaccine and adequate PPE. To the citizens, let us adhere to covid-19 protocols and save lives. To the workers, my prayer is that we find each other and fight for our class interests and emancipate ourselves from the jaws of the brute capitalism. The year 2021 is uncertain but our demands and needs are certain so let us not tire until we achieve.

GOD BLESS you all .