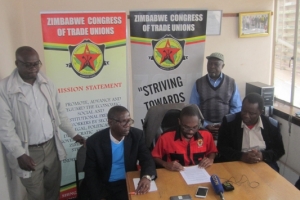 May I welcome you all to this Press Conference.

The Zimbabwe Congress of Trade Unions (ZCTU) notes with serious concern that, through Statutory Instrument 142 of 2019, the Government of Zimbabwe has unliterary, with effect from the 24th June, 2019 abolished use of multi-currencies and has reintroduced the Zimbabwe Dollar for all local transactions.

This announcement came a day after the Minister of Finance and Economic Development had assured the nation that the Zimbabwean Dollar will only be introduced when macroeconomic fundamentals are in place.

Such a critical issue should have been subjected to intense dialogue, and it smacks of hypocrisy and is patronizing for Government to unilaterally make such a huge policy announcement at a time social partners were supposed to meet on Wednesday, 26 June 2019 under the auspices of the recently enacted Tripartite Negotiating Forum (TNF).

We would like to note that Government has been taking its people for granted for quite some time now, lying when it introduced the bond notes in 2016 that they were adequately backed by lines of credit from Afreximbank, that the 1:1 exchange rate between the USD and RTGS$ were also backed by adequate lines of credit when they separated Nostro and RTGS Foreign Accounts (FCAs) in October 2018, and again that the inter-bank foreign exchange market would stabilize after its introduction in February 2019 on the back of ‘unproven’ external lines of credit. These all proved to be false guarantees as the local currency could not hold against the USD and other foreign currencies.

It is also important to observe that Government profligacy and fiscal imprudence led to the debauching of the Zimbabwe Dollar during the hyperinflation period (2007-2008) and now the multi-currency system through chronic high inflation.

Clearly, in both episodes, the working people of Zimbabwe have lost substantial value in their earnings, pensions and insurance products and are essentially incapacitated to work as they earn in the fast depreciating RTGS Dollars.

With impunity and no sense of shame, the Government is shying away from responsibility for the destruction of the local currency in the first instance, and now the multi-currency system that it inherited in a functional state following the end of the Government of National Unity (GNU) in 2013, and is pushing the already impoverished workers to earn only in the meaningless RTGS Dollar which can no longer effectively function as a medium of exchange, unit of account, store of value and standard for deferred payment.

Following this diabolical announcement, the workers who in some instances were being cushioned by having part of their wages and salaries paid in USD have lost that benefit. In typical double standards, the same Government exempts ZIMRA from levying duty in the local currency on ‘luxury goods’ that it is shoving down everyone else’s throat.

The ZCTU condemns such flagrant disregard for social dialogue and respect for social partners, and in particular, violation of Section 13(2) of the Constitution which obligates Government to “…involve the people in the formulation and implementation of development plans and programmes that affect them.”

We are therefore consulting our lawyers and we may file an urgent court application challenging the constitutionality of the policy pronouncement and that it also violate the Tripartite Negotiation Forum (TNF) Act section 3 (a), (c) and (e).

Section 3(a) says the function of the TNF shall be to “Consult and negotiate on social and economic issues and submit recommendations to the Cabinet”.

Section 3(c) says the function of the forum shall be to “foster cooperation of the tripartite constituents and consult other key stakeholders and contribute to the formulation and implementation of social and economic policies.”

The ZCTU has not moved from its position that the short-term solution is to dollarise and as such we are going into TNF to demand US Dollar salary payments for all employees.

We are also attending the TNF to express our displeasure about the unilateral policy pronouncement and the substance of the policy itself.

If the government does not reverse this ruinous policy immediately and announce US Dollar salary payments we will immediately mobilise workers for mass action.