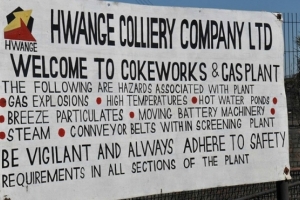 Let me welcome you all members of the Press to this Press Conference. We have called this conference specifically to talk about the situation at Hwange Colliery Company. As you are aware, spouses of Hwange Colliery workers are currently camped at the company premises demanding outstanding salaries of their husbands, and they have been there since Monday 29 February 2018. This is despite the varying adverse weather conditions. It has been hot, cold and wet but they have continued with their struggle.

It all started when one woman ran out of food to feed her child. She had given the little remaining food to the child to enable the child to go to school. When some of her friends visited the women, they found her weak and almost collapsing due to hunger. She told them that she was not ill but had no food and cannot even afford porridge. This angered the women and they took a decision to confront company management over their husbands’ salaries. The women’s anger also coincided with management’s announcement to suspend all salary payments until July 2018. They started mobilizing the community using social media and this resulted in a full blown demonstration against Hwange Colliery management.

Hwange Colliery workers have not been paid their salaries for four years and are owed in excess of $70 million dollars. As a result, they cannot access medical care, education and any other services that require money. The majority of workers have defaulted on contractual payments for residential stands, insurances and other obligations. Besides that, there is also high level of victimization if workers ask for their salaries or anything related to their conditions of service, hence the resolve by their wives and the community to demonstrate on their behalf.

Despite being at fault, the management was acting arrogantly and refusing to meet the striking spouses and had the temerity to approach the courts to try to force the police to disperse the strikers. To add salt to injury, the management unliterary deposited an average of $200 in the accounts of workers.

On 2 February 2018, the ZCTU sought the intervention of his Excellency President E.D Mnangagwa but his envoy, Home Affairs Minister Obert Mpofu, failed to solve the matter. We believe the President should have sent the labour minister instead of a Minister who is responsible for the police.

Eventually under pressure, on Sunday 11 February 2018 they called what they termed “an all stake holders meeting” in which the ZCTU was represented. The meeting was attended by the workers committee, trade unions, retired employees who were owed money, representatives of demonstrating women, widows of former mine employees, retired former managerial employees who are also owed money, pensioners, the ministry of labour, the police and ZDF and chief Shana of Hwange.

Mine management indicated that they owed creditors $352million, including the $70 million they owe workers. They indicated that they did not have funds to pay off what was owed to workers but could only pay through financing from production. Management reiterated that the only way out of the financial situation the company was facing was through the Scheme of arrangement. However problems were noted during implementation of the Scheme of this arrangement, which had resulted in the workers and other stakeholders demanding what is owed to them.

At the meeting, workers indicated that due to none payment of salaries, their children were not going to school or university, they did not have medical care, they faced evictions from company accommodation and there was hunger and starvation in their homes. There was generally uncertainty due to none payments of salaries, pensions and retrenchment funds.

The ZCTU delegation, together with the women representatives, retrenches and all other walked out of the meeting as it was that felt management was not being sincere.

Certainly there is a humanitarian crisis in Hwange and therefore the ZCTU demands that:

1. The entire Hwange Colliery Mine Management should resign immediately as they have failed dismally to run the company
2. Government should institute a commission of enquiry and a forensic audit as we believe siphoning of resources is the order of the day at the company.
3. The Parliamentary Portfolio Committees to also institute their own investigation.
4. All conditions of work benefits that were arbitrarily withdrawn be reinstated
5. The company reposes and manage the Colliery Hospital. The medical health and care institute should not be privatised especially where workers are not being paid.
6. The company should withdraw immediately its court application to bar the women from demonstrating as it was their constitutional right and letters of eviction be withdrawn.

The ZCTU will continue to mobilise support for the striking women in Hwange in whatever way, even if it means conducting a demonstration at Coal House here in Harare. We are also calling for humanitarian assistance from Government and other Non-Governmental organisation as there is a serious shortage of food and school children are very vulnerable.

We will also continue to make a follow up on His Excellency Emmerson Dambudzo Mnangagwa to intervene in this matter. Government is the majority shareholder at Hwange Colliery Mine, making it a strategic unit of government it must not continue to be run down.

ZCTU noted through evidence gathered that the Colliery mine was fraught with high incidences of corruption, nepotism and blatant violation of workers and trade union rights. This explains why the company has parcelled out subsidiary companies and those companies are religiously paid by Hwange Colliery Company for their services, even their workers have no salary arrears, yet those at the main company are not being paid.

Such action by the company portrays a very bad picture to the nation and international community at a time the country is making all efforts to reengage with the world.

Generally speaking, the whole community is in a bad state and it will not be surprising that one day there could be an outbreak of serious diseases such as cholera and typhoid. An average of 200 people share a toilet and worse still those toilets have no doors depriving people of privacy.

We are also concerned that the military and the police were roped into the meeting. This is purely a labour dispute and they should stay clear. If we allow them, we will be setting a bad precedent.

Let me end up by pointing out that this is not the first time spouses of Hwange Colliery employees have demonstrated. They did the same in 2013 over the same issues. About 100 women at that time walked 20 KM to the General Manager’s office to demand their husbands’ salaries. They were brutally beaten up by the riot police.

I would like to thank you all for you attention and attendance.