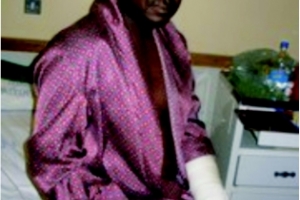 RE: ZCTU REMEMBERS 13 SEPTEMBER 2006 STATE BRUTALITY AGAINST TRADE UNIONISTS
Today 13 September 2020, the Zimbabwe Congress of Trade Unions (ZCTU) commemorates the 14th anniversary of the event that happened on 13 September 2006 were 147 of our members were tortured for participating in a protest demanding better lives. The ZCTU leadership was brutally beaten and they were left for dead. Some have lived with the scars and some have since died.
The then President Robert Mugabe said the ZCTU leaders got the treatment they deserved. He told the media that ‘If you want an excuse for being killed, be my guest, go into the streets and demonstrate’. Since then the ZCTU has on its calendar of events a day we call ’13 September Police Brutality Day’.
In the few months, the world, and Africa in particular, has been focused on Zimbabwe as reports of human rights abuses take center stage. It took the arrest of a political leader and an award winning journalists to awaken the world, particularly some of our African brothers who have always been skeptical when told of the atrocities being committed in Zimbabwe in the past year such as the disturbances in Matebeleland where 20 000 were massacred. During the early 1990s, the ZCTU raised several alarms on gross human rights abuses and very few people took note. Even during the Land Reform programme, over 400 000 farmworkers were forcibly displaced, some maimed and injured. During Mugabe’s time, this became his modus operandi. It was not only confined to trade unionists, but also political opponents, civic organisations and journalists. Abductions, torture and arrests became the order of the day.
.
After our several complaints and that of fellow trade unions, it was in December 2009 that the International Labour Organisation (ILO) appointed a Commission of Inquiry under article 26 of the Constitution of the ILO to examine the observance by the Government of Zimbabwe of the Freedom of Association and Protection of the Right to Organise Convention, 1948 (No. 87), and the Right to Organise and Collective Bargaining Convention, 1949 (No. 98).
Under the title “Truth, reconciliation and justice in Zimbabwe,” the Commission of Inquiry published its finding that concluded that “there was systematic, and even systemic, violation of the Conventions in the country.” It saw a clear pattern of arrests, detentions, violence and torture of trade union leaders and members by the security forces coinciding ZCTU nationwide events, indicating some centralized direction to the security forces to take such action and a clear pattern of control over ZCTU trade union gatherings through the application of the Public Order and Security Act (POSA). It noted the systematic targeting of ZCTU officials and members, particularly in rural areas, involving significant violence and anti-union discrimination in employment, in what appeared to be a calculated attempt to intimidate and threaten ZCTU members.
It also noted with particular concern the routine use of the police and army against strikes,
widespread interference in trade union affairs and the failure to guarantee judicial independence and the rule of law, resulting in a situation of impunity for those perpetrating atrocities”. In its recommendations, the Commission of Inquiry therefore calls for among other things, the cessation with immediate effect of all anti-union practices, as documented in its report. But nothing happened.
However, when President Emmerson Mnangagwa took over after the disputed 2018 national elections, there was a glimmer of hope of better times to come as he called his government a ‘new dispensation’. He promised freedom and economic turn-around for the country and everyone was charmed and there was a lot of goodwill in the country with the hope that he is indeed ready to close the past chapters of repression and economic turmoil and corruption. Unfortunately he squandered that goodwill, not only from Zimbabweans, but even from the international community that turned a blind eye to the fact that his ascendance to power was through a military coup.
From 2019 to mid-2020, the so called New Dispensations’ true true colors were now on display. Repressive laws still exist and interference in trade union business by the police and other law enforcement agencies is still the order of the day.
Zimbabweans remember the shooting to death of innocent protesters in 2019 and the human rights situation got worse in 2020 as trade unions were hunted down and arrested; some put on a “wanted persons” list as if they were criminals; A number of trade unionists have been arrested, threatened with deaths; with bullets have been sent to their homes. A spate of abductions and torture of activists have taken place. Trade unions are still expected to apply for police clearance to hold meetings and demonstrations despite the provisions of the law that do not make it compulsory.
The emergence of COVID-19 has given the authorities an excuse to curtail people’s freedoms. Moving around even with genuine reasons has become a nightmare as people are beaten up by the soldiers. Because of COVID -19, any form of dissent is quickly put down.
As we remember this sad day, 13 September 2006, the State must stop the continued intimidation, harassment, and persecution of the unionists as well as stop the criminalisation of trade unionism.
We also demand a stop to abductions, torture and arrests of trade unionists, journalists and other civic leaders and perpetrators must face the law.
Japhet Moyo
SECRETARY GENERAL