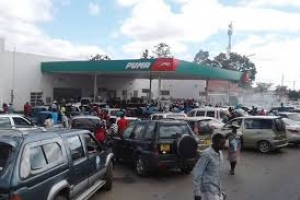 On 21 May, 2019, the Reserve Bank of Zimbabwe advised that with immediate effect the procurement of fuel by the Oil Marketing Companies (OMCs) will be based on the interbank foreign exchange market. This policy directive effectively removed the 1:1 foreign currency exchange rate for the procurement of fuel by Oil Marketing Companies (OMCs). The move was ostensibly adopted to promote the efficient use of forex and to “minimise and guard against incidences of arbitrage.” What this means is that Government will no longer be sourcing and allocating foreign currency to OMCs.

The RBZ had earlier indicated that it was making a drawdown on a US$500 million offshore line of credit to supplement the country’s foreign exchange receipts in order to underpin the interbank forex market. The RBZ claimed that this facility would help meet foreign payment requirements of businesses and individuals. Banks were encouraged to discontinue twinning arrangements for their customers which undermined the efficient operation of the interbank foreign exchange market.

To try to minimize the impact of the interbank-based fuel procurement on prices, government reduced the duty for petrol from $2.30 to $1.15 and that for diesel from $2.05 to 90 cents. Through the Zimbabwe Energy Regulatory Authority (ZERA), government announced that with immediate effect from May 21, 2019, the price of diesel is pegged at $4.89 while petrol will be sold at $4.97, applicable until 26 May 2019. The statement also pointed out that operators may sell petroleum products at prices below the cap depending on their trading advantages.

The ZCTU notes with great concern that notwithstanding the reduction in fuel duty, placing fuel procurement on the interbank market will result in frequent price adjustments given the rapid depreciation of the RTGS dollar on both the interbank and parallel markets. The upward adjustments in fuel prices will have knock-on effects on the prices of basic goods and services, worsening the impact of the already depreciating exchange rate on the general level of prices.

Already commuters transport fares are now between $2 and $5; medical aid has more than tripled and funeral polices doubled making life unbearable to most Zimbabweans.

The working people of Zimbabwe have already suffered immensely as inflation rose sharply from 5.4% in September 2018 to 75.9% by April 2019. Wages have failed to keep pace with the inflationary trends. In addition, pension and other statutory contributions have been severely eroded, compromising applicable benefit payments. For example, with average minimum wages of RTGS$300, against a Food Poverty Line (FPL) of RTGS$295 and a Total Consumption Poverty Line (TCPL) of RTGS$873 for a family of five in April 2019, it is evident such wages are below survival levels, reducing most workers to the working poor. That is why the ZCTU has been demanding a minimum wage of US$600.00.

Clearly, the US$500 million facility that is meant to stabilize the interbank foreign exchange market falls short of requirements, especially in the context of fuel and energy shortages. In the context of persistent supply constraints, the exchange rate will continue to depreciate, further fuelling inflation. The resultant increase in the cost of production will worsen viability challenges, resulting in deepening company closures and retrenchments. Furthermore, the reduction in public bus fares is of limited importance to most workers given that it only applies to public transportation, which has just been reintroduced, with limited coverage and capacity.

As ZCTU has stated before, history is repeating itself as the economy is re-living the experiences of the hyperinflation period.

The erosion of value through decimating the currency was well noted by John Maynard Keynes in his book on “The Economic Consequences of the Peace,” which was published in 1919, when he observed that: “Lenin was certainly right. There is no subtler, no surer means of overturning the existing basis of society than to debauch the currency. The process engages all the hidden forces of economic law on the side of destruction, and does it in a manner which not one man in a million is able to diagnose.”

Much earlier, in a study composed for the Prussian and Polish governments around 1525, Copernicus observed as follows: “Although there are countless maladies that are forever causing the decline of kingdoms, princedoms, and republics, the following four (in my judgment) are the most serious: civil discord, a high death rate, sterility of the soil, and the debasement of coinage. The first three are so obvious that everybody recognizes the damage they cause; but the fourth one, which has to do with money, is noticed by only a few very thoughtful people, since it does not operate all at once and at a single blow, but gradually overthrows governments, and in a hidden, insidious way.”

The ZCTU General Council met today, 23 May 2019 and agreed on the following Way forward:

1. Under these destabilizing and distressing macroeconomic conditions, the only sustainable route out of the crisis is the negotiation of a Social Contract, and associated protocols. The protocol negotiated in 2003 and revisited in 2007 on Prices and Incomes Stabilization bears relevance in addressing the disequilibrium between prices and incomes today. We therefore call upon government and business to come to the negotiating table as a matter of urgency in order to redress the deteriorating conditions of the working people of Zimbabwe. The social dialogue route is rooted in, and is in line with Section 13(2) of the Constitution, which obligates Government to “…involve the people in the formulation and implementation of development plans and programmes that affect them.”
2. The ZCTU demands that an urgent Tripartite Negotiation Forum be convened to discuss the State of the economy and the way forward
3. Contrary to the Constitution, this government has a tendency of announcing polices without consultations as required by section13 (2) of the Constitution. We reserve the right to approach the courts for redress.
4. Since the Statutory Instrument 33 of 2019 did not deal with workers contracts, the ZCTU will sue employers who varied workers’ contracts of employment without consulting them.
5. Workers must get back their US$ savings that was converted into bond notes by the Reserve Bank without their consent.
6. The ZCTU is in the process of consulting structures to get a mandate for mass action in the event that the above issues are not addressed.