ZCTU WORRIED BY THE ON GOING STRIKE BY DOCTORS 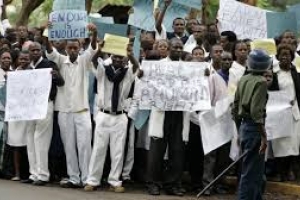 THE Zimbabwe Congress of Trade Unions (ZCTU) is greatly disturbed by the apparent impasse in the labour dispute between the Government and striking doctors. The continued strike is causing untold suffering of ordinary Zimbabweans as it has paralyzed operations at state-run hospitals.

We note with concern that patients are being turned away from government hospitals as the few doctors who have remained at work are failing to cope.

Junior doctors downed their tools last week demanding release of their open practicing certificates, review of their on-call allowances and other non monetary incentives. They were later joined by their seniors who cited huge burden of care in the absence of junior doctors. For a long time the government has been promising doctors that it will improve their conditions of service but nothing has been done.

While the tug of war is going on, millions of people are not getting medical services at State hospitals and there is no doubt that bodies of the dead are piling up in mortuaries, deaths that could have been avoided if the country had a sensitive government.

With the majority of the Zimbabwean workers earning way below the Poverty Datum Line, it is difficult for them to access health care at private institutions. What is more disturbing is the slow action in addressing the concerns of doctors. Doctors, like everyone else, have a right to strike when they feel that their rights have been violated.
We demand that government should, as a matter of urgency, address the needs of striking doctors in order to avoid loss of lives at hospitals. It should also devise an effective system of reviewing health personnel and other civil servant’s salaries before strike action otherwise we will be faced with the same problem of doctors going on strike year after year.